I am on a decluttering mission. Again.

The undeniable benefit of moving at regular intervals is that you have a built-in excuse to assess your belongings. Quite uncharacteristically, I have now been in the same place for six years. Over time, stuff inevitably builds up.

It seems that in the last 18 months, however, I am permanently shifting, rearranging and disposing of things.

Like most expectant moms, I went through a late-pregnancy nesting phase. My house had never been so clean.

In the absence of a nursery, this was accompanied by the prerequisite furniture shuffle to accommodate Lilly’s gear. It never ceases to amaze me just how much more will fit into our one bedroom flat. Maybe if I keep adding stuff, it will just continue to magically expand – like in a fairy tale or something?

But I seriously thought this whole ‘nesting’ thing was meant to be over and done with once your child is born. Yet I am forever reconfiguring and getting rid of bits ever since Lilly came along. That’s not a bad thing.

The problem with decluttering is of course that it doesn’t last. Much like cleaning or doing laundry, it’s not a permanent achievement. And if you leave it long enough, like I do, then the process actually is a whole load of work. But I still haven’t figured out how to do it ‘regularly’.

Because let’s face it, I actually don’t feel the need to declutter until things get pretty out of control. I am reasonably comfortable with a certain amount of disorder. Basically anything that involves detail and repetitiveness isn’t my thing. I suck at admin. Until two days ago, I hadn’t done any filing in three years. You think I am kidding but rest assured, I am not.

For better or worse, however, the point of no return comes around more frequently these days, mainly due to Lilly’s ever-changing needs.

The move from co-sleeper to cot for example meant that half our bedroom needed to be rearranged. Up until now, her growing toy collection slotted reasonably well under my desk – until Santa brought a table and chairs, that is.

So my latest domestic re-org was prompted by the growing threat of said toy collection. That combined with the fact that I could no longer see my desk for all the paper piles. Too much clutter and I feel like I can’t think, much less work and be productive.

Besides, it’s the start of a new year, which seems as good a time as any to ‘start’ over.

Sadly, as confirmed by Jill Pollack, ‘there is no such thing as a declutter fairy, who works while you sleep’. So one (painful!) trip to Ikea later, I now have toys stored in boxes, a clean desk, and paperwork in folders. I’m a long way off from ever living in a pristine place like this… 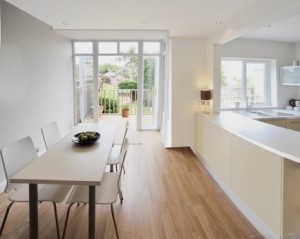 …but at least I feel like I am breathe and think again.

There’s a lot more to be done, but I feel I am off to a good start.

I’d love to think I can keep it up… but just in case, I’d better get a date into my 2016 diary for my next filing session.